MAD's “Out of Hand: Materializing the Postdigital” Opens in New York City, With Works 3D Printed at Materialise

New York City – October 16, 2013. Opening today, after months of anticipation, is the Out of Hand: Materializing the Postdigital exhibition, curated by Ron Labaco and running at the Museum of Art and Design in New York City until July 6th, 2014. Out of Hand is the first major museum exhibition to examine the impact that digital fabrication is having on artistic expression; displaying the pioneering works of more than 80 international artists, architects, and designers. Represented will be some of the most compelling creations from the past decade ranging from sculpture and furniture to fashion and transport - many of which were produced through 3D Printing at Materialise. Furthermore, on the occasion of Materialise's inclusion in the exhibition and in recognition of the company's commitment to technological innovation in 3D printing, Materialise and its CEO Fried Vancraen will be among those honored with a Visionaries! Award by the Museum on November 20th. 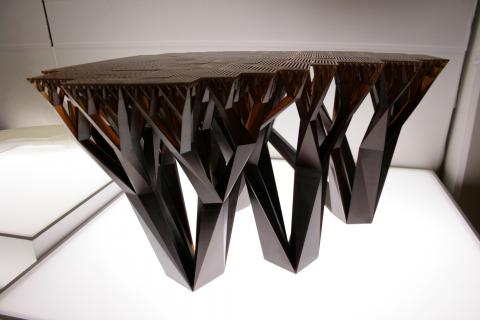 Through Out of Hand, MAD aims to explore a monumental transition in the way human beings understand creation, from the earliest objects conceived and produced by individual makers through the tools of technological innovation. Today's digital fabrication methods, such as 3D printing, give individual artists, architects, and designers the ability to go beyond the traditional boundaries of production, often resulting in objects that may otherwise be impossible to realize. Artists, architects and designers who have collaborated with Materialise for pieces in the exhibition include Bathsheba Grossman, Naim Josefi, Dror Benshetrit, Wertel Oberfel, Aranda\Lasch, Softkill Design, Stephen Jones, Jan Habraken and last, but certainly not least, fellow Visionaries! Award honoree, Frank Stella.