Paris, France – March 5th, 2014. On Tuesday, Iris van Herpen unveiled her Biopiracy Collection, her most ambitious and largest collection to date, at Les Docks - Cité de la Mode et du Design in Paris. The show featured a collaboration between Iris and Lawrence Malstaf that resulted in models being suspended in transparent plastic and shrink wrapped into place, creating an unforgettable backdrop for the catwalk. The finale to 25 other breathtaking ready-to-wear and Haute Couture designs was the 11th dress Iris van Herpen has 3D printed in collaboration with the 3D Printing pioneers at Materialise and her 3rd with Austrian architect, Julia Koerner. 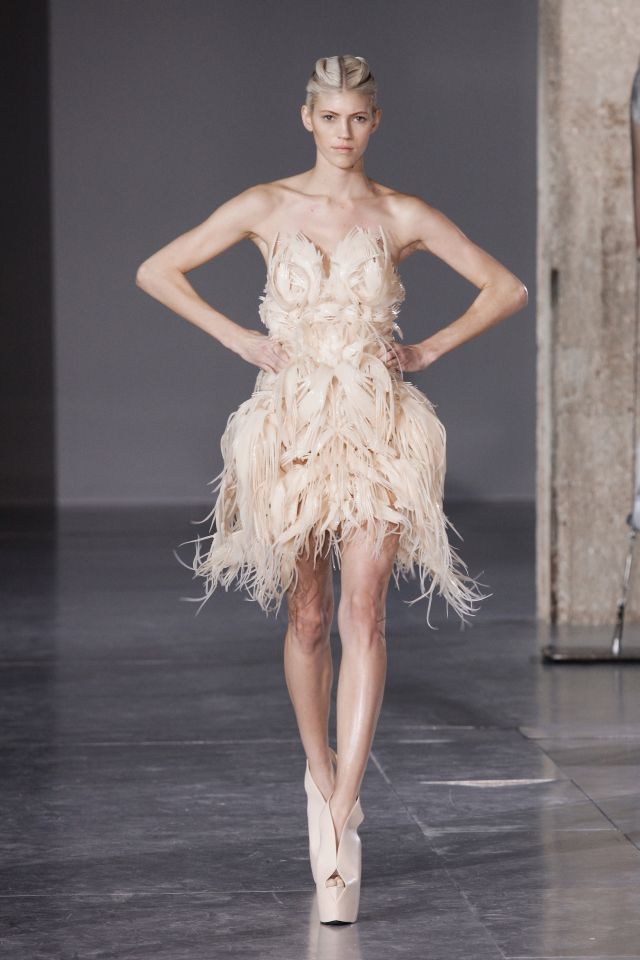 For this dress, Iris van Herpen returned once more to Materialise's flexible material for 3D Printing, TPU 92A-1, which she used to great effect for her Voltage Haute Couture show in January last year. For the Biopiracy Collection, Iris and Julia worked together on a design that successfully pushed the limits of what both TPU 92A-1 and Laser Sintering (the process used to print this dress) could do, with Materialise's Magics software being used to optimize the design for the 3D Printing process and ensure a successful outcome. The result was then coated in silicon by Iris's team to give the flowing, flexible dress a glossy sheen. Given the intricacy and movement of the design on the catwalk, the dress is a testament to how far 3D Printing materials and technology have progressed.

Speaking about the latest collection Sven Hermans, Iris van Herpen's dedicated Account Manager at Materialise said, "It was a pleasure to work together with Iris and Julia once again to put Materialise's software and machines to the test. Getting a close look at the dress backstage and then seeing it move so gracefully on the catwalk, I can feel proud of what Iris van Herpen, together with Julia Koerner and Materialise have achieved ." 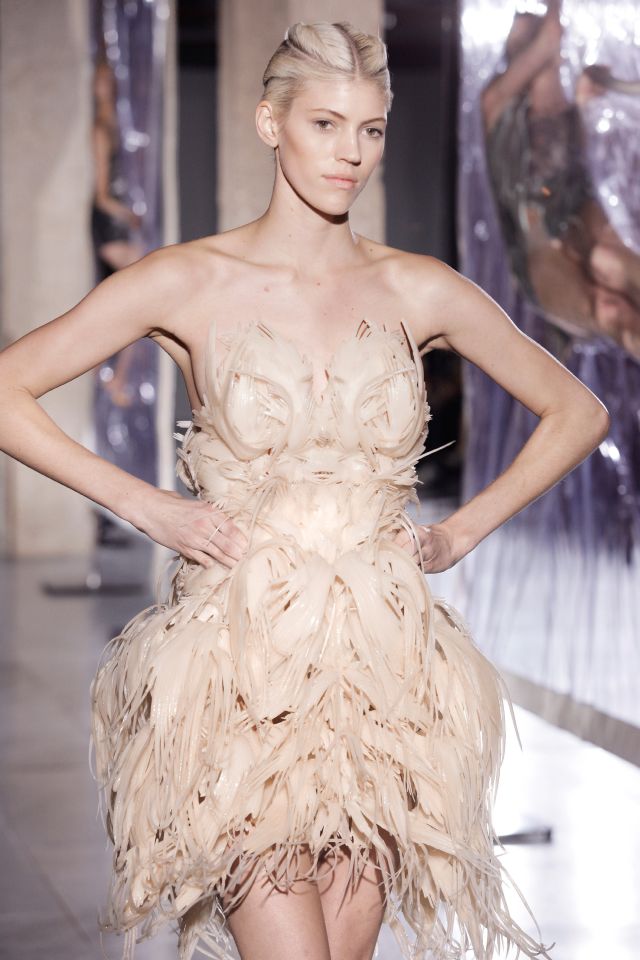 Iris van Herpen's collaboration with Materialise began in 2010 with the Crystallization Collection, done with the support of architect Daniel Widrig and unveiled during Amsterdam International Fashion Week. This was followed by four pieces in 2011's Escapism Collection, a collection again done with Widrig, which debuted to critical acclaim during Paris Fashion Week- Haute Couture. A final piece for 2011 played a central role in an exhibition entitled The New Craft: Iris van Herpen and her Inspiration at the Central museum Utrecht as well as taking to the runway in Paris with the Capriole collection. Known as the Skeleton Dress, this piece was done in collaboration with architect Isaïe Bloch.

In January 2012, Iris van Herpen revealed her second collection as a guest member of the very exclusive haute couture club - Micro Haute Couture – working again with Bloch. This time, she brought her printed design one step further by having it metal plated for a gorgeous bronze finish. Later in the year, she worked with architect Julia Koerner for her Autumn/Winter 2012/2013 collection – Hybrid Holism – in which she explored Mammoth Stereolithography for the first time. The result was a 3D Printed dress which one awestruck spectator compared to "liquid honey."

Finally, in January 2013, ready for an even greater challenge, an experimental new material, TPU 92A-1, was put to use in the creation of a flexible, soft dress of stunning complexity for Iris van Herpen's Voltage Collection. Designed once more in collaboration with Julia Koerner, the piece's intricate lace-like texture was created with precision by lasers (in a process known as Laser Sintering) and would have been impossible to realise any other way. Later in the year, she took another bold step into the unknown with the Wilderness Embodied collection by producing a hybrid creation involving both 3D printing and traditional craftsmanship. The dress incorporated unique, transparent bone-like structures produced with Mammoth Stereolithography which were over-moulded in silicon by Iris van Herpen's team, a process that demands great skill and which took weeks to complete. The final result was, as always, stunning.