Following a day featuring speakers such as Herman Van Rompuy, President of the European Council, Prof. Dr. Vermeersch, member of the surgical team responsible for Belgium's first face transplant, and Iris van Herpen, rising star in the world of Haute Couture, the Materialise World Conference put on a fashion show with a 3D printed twist. Making their runway debut were four hats from Brussels' master milliner Elvis Pompilio, clutch purses and necklaces by renowned designer Daniel Widrig, and a collection of stunning pieces that redefine how accessories can be worn by Niccolo Casas. Also on the catwalk were the top 20 designs of a hat and hair accessory competition, the "Hat's Off to 3D Printing Challenge," which was put together by Materialise's consumer division i.materialise. All of the designs were produced by Materialise at their Headquarters in Leuven, Belgium. 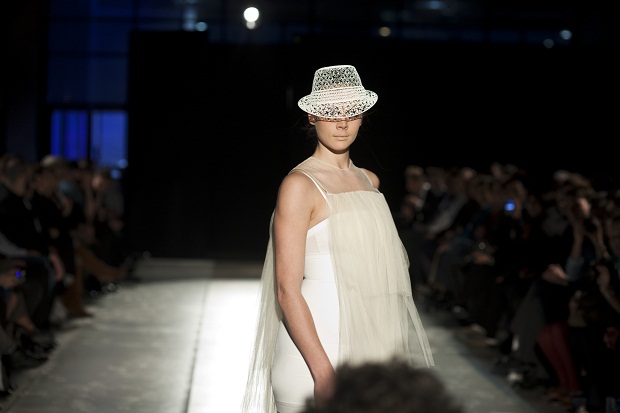 At the end of the fashion show, the three designers involved took to the stage to announce the winner and runners-up of the design competition, a tense moment for the contestants who had travelled to Leuven in order to witness their designs on the catwalk first hand. The winner of the evening was Mark Bloomfield for his hat 'Daisy'. Runners-up were Dario Scapitta and Song Bowen.

Another big announcement came the day after the fashion show. Fried Vancraen, CEO of Materialise, announced to the attendees of the Materialise World Conference that the designs of Niccolo Casas would be joining the .MGX by Materialise collection, the award-winning line of design products made in collaboration with famous designers worldwide. Niccolo Casas will be joining other celebrated designers in the .MGX by Materialise collection including Patrick Jouin, Arik Levy, and Luc Merx, among others.