May 22, 2013. RAPID 2013, North America's definitive Additive Manufacturing Exposition and Conference, will be held in Pittsburgh, PA, from June 10th through 13th.

There will be an Opening Reception on the evening of June 10th at the Andy Warhol Museum, from 5:30 - 10:00 PM, sponsored by Materialise, a Belgian-based pioneer in Additive Manufacturing (also known as 3D Printing). The Reception, which will include refreshments, will offer a primary networking opportunity for RAPID attendees.

In addition, Murray Moss, Curator and Creative Director of Moss Bureau, New York, together with Materialise, will present "Factory 2.0", a series of installations in various locations within the Museum, which will illuminate the RAPIDly evolving relationship between Art and Additive Manufacturing, focusing on innovations which are changing how Art is conceived and made - innovations which, fittingly, Andy Warhol so brilliantly and prolifically contributed to. 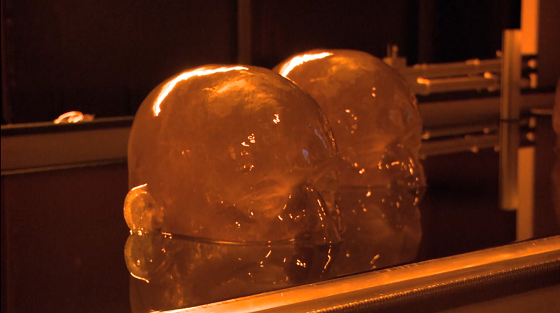 The first installation, in the museum's Main Gallery, establishes an intersection of Andy Warhol's now-iconic innovations in 'Factory Art' and today's new additive manufacturing art-making possibilities. Highlighting Warhol's obsession with celebrity and celebrity culture, which arguably manifests itself most in his self-portraits, the gallery will feature the artist's enormous Self-Portrait (Fright Wig), 1986, among the very last works he executed himself, which will be specially hung for this event.

On either side of this portrait, between two sets of columns, Moss will ceremoniously place two low platforms, facing each other. Upon each little stage sits a minimal scaffolding from which is suspended a huge 3D printed interpretation of a Fright Wig, one in pink and the other in blue, interpreted by Materialise in translucent resin (Warhol once said, "... I love plastic. I want to be plastic.") using their proprietary Mammoth Stereolithography technology. These astonishing machines are able to create objects of up to 2100x680x800mm in a single print. Guests are invited to seize the opportunity to claim the fame; by stepping onto either stage and standing beneath the wigs, one appears to be wearing the wig, as in Warhol's portrait. Photographers stationed ceremoniously in the middle of the room will take each guest's 'Self-Portrait' using the now obsolete Polaroid camera; the photos will be given to each 'subject' as a memento.

Acknowledging Warhol as a pioneer in computer-generated art, having used Amiga computers introduced in 1984, two years before his death, and simultaneously reacting to the 2009 sale of Warhol's 1963 canvas, 'Eight Elvises', which sold for one hundred million dollars, Jones gives us 'four Joneses', titled The Four Continents. These are four differently colored statues of Mr. Jones, each of which depicts a bust of himself donning an allegorical 'head dress' designed by the milliner to represent either Africa, Asia, Europe, or the Americas.

Using current advances in scanning capabilities, provided by London-based 'sample and hold', Materialise 3D printed Jones' bust to near-perfect accuracy, including exceptionally rich detail not only in the face but also in the texture and pattern of the subject's costume. The texturing was made possible thanks to Materialise's 3-matic software, which allows for editing directly on a 3D-printable file; making it possible to add textures, labels, and other functional elements useful for the printing process. The busts sit on computer-designed pedestals, once again printed with Mammoth Stereolithography and created through an algorithm in Materialise's 3-matic software for lightweight structures, applying mathematics to a traditional form of a classical object. As much an efficient scaffolding as a decorative plinth, the pedestals humbly reveal and celebrate profound new possibilities and new aesthetics that accompany developments in Additive Manufacturing. In fact, this is the second time the busts find themselves supported by such complexity, as similar algorithmic structures are created during the printing process to lend support to the objects as they are brought to life, layer by layer, in the liquid resin.

In The Four Continents, Jones, like Warhol, creates an allegorical self-portrait, representing, through an anachronistic subject, his global identity- something Warhol surely sought and most definitely achieved.

About Murray Moss:
In the April 2012 issue of Metropolis magazine, Jennifer Kabat writes in her feature story, 'Murray's Next Act', "... Moss is no ordinary mortal, but one who has defined the design decade, who helps to see how we see objects".

Murray Moss is the founder and creative mind behind the internationally renowned Moss design gallery, established in 1994 and in its 18 year history mounting over 100 highly influential exhibitions, not only at Moss, New York, but also at Design Fairs and Museums around the world. Moss, a former fashion entrepreneur, set out to correct the public's here-to-fore 'blanket' criteria for evaluating industrial product design, over time expanding the definition of 'good design' to more accurately accommodate a nuanced multiplicity of briefs which designers often bring to a project. His agenda was not only to discover those 'bonus' narrative elements, or 'art content', often embedded in functional works, giving them a duality and fluidity which blurs the customarily rigid distinctions made between Art and Design, but also to invent more effective ways of exposing them to the general public, so that they become not only evident, but valued in their own right.

In February of 2012, partners Murray Moss and Franklin Getchell closed their Greene Street gallery and inaugurated Moss Bureau, a highly experienced and informed design consultancy providing a multiplicity of services to manufacturers, design studios, and architectural firms, as well as offering curatorial and interior design services, and brokering speaking engagements and writing assignments.

Mr. Moss has served on the Boards of the Smithsonian Cooper-Hewitt National Design Museum and the Design Industries Foundation Fighting AIDS (DIFFA), and has been acknowledged through numerous awards in his field, including the 2002 Chrysler Design Award and Russel Wright Award, House Beautiful's 2000 Giants of Design Award, and Metropolitan Home's 2004 Modernism Award. In 2007 he was inducted into Interior Design Magazine's Hall of Fame.

Materialise works with a growing list of celebrated designers and artists from around the globe, including Iris van Herpen, Frank Stella, Patrick Jouin, Stephen Jones, and many more. During the 2011 London Design Festival, Murray Moss curated a special exhibition for the Victoria & Albert Museum entitled Industrial Revolution 2.0: How the Material World will Newly Materialise. The exhibition involved a range of 3D printed objects produced at Materialise's Belgian headquarters and created by both established and up-and-coming artists, architects, and designers. It is also worthy to note that Materialise has pioneered the use of 3D printing for consumer goods through their .MGX by Materialise brand and its celebrated line of high-end design products. Created in collaboration with some of the greatest names in design today, .MGX creations have made their way into the permanent collections of world-class museums, and have an ever expanding collection of prestigious awards to their credit (including 3 Red Dot Design Awards and 4 Good Design Awards).