Marking one of the first times that works by Andy Warhol have been reinterpreted by 3D Printing technologies, the event, (organized to celebrate the opening of the RAPID 2013 Additive Manufacturing Conference & Expo), featured both "Factory 2.0", a series of Warhol-inspired installations spread about the museum, as well as the five finalists of the "i.materialise Andy Warhol Contest". The event was a resounding success with hundreds of awestruck visitors seeing firsthand how 3D Printing is changing the way that art is conceived and made. 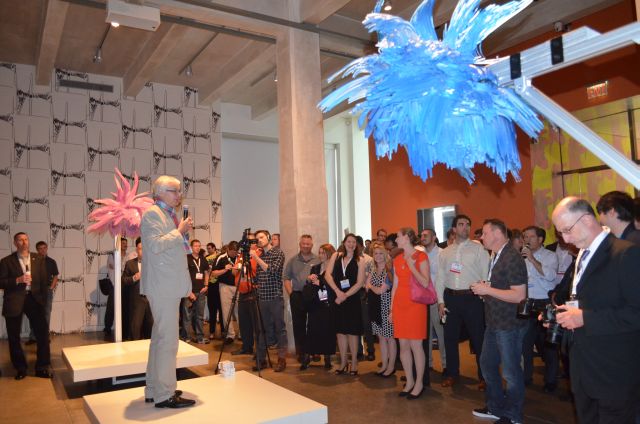 Curated by Murray Moss, Creative Director of Moss Bureau New York, Factory 2.0 showcased two huge, 3D Printed interpretations of Warhol's Fright Wigs. Enthusiastic guests lined up to stand beneath them and have their Polaroids taken. In another area of the museum, a second impressive installation, this time by renowned British milliner Stephen Jones and entitled the "Four Continents", provided a reinterpretation of Warhol's piece "Eight Elvises". For further details about Factory 2.0, its inspiration and installations, please visit the Factory 2.0 page.

"Wigs" by Murray Moss and "Four continents" by Stephen Jones, all art pieces have been produced on Materialise' giant Mammoth stereolithography machines and painted in translucent colours"

Organized by Materialise's on-line 3D Printing service i.materialise, the i.materialise Andy Warhol Contest challenged designers and artists worldwide to submit 3D printable designs inspired by the pop art movement. Also on display were the works of the five finalists, chosen for their inventiveness and originality. The winner was announced by i.materialise just after the event, on June 11th. 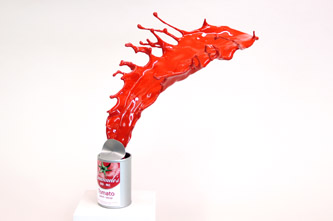 Comments by Curator Murray Moss:
"Warhol's use of mass commercialization of food products as a subject for art has since his time, exploded, as this work metaphorically expresses; the potential power of a mass brand knows no boundaries and can no longer be 'contained'." 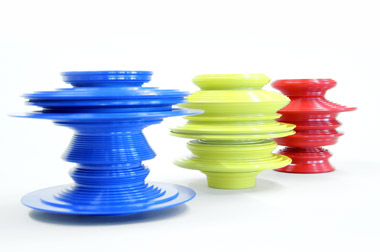 "Speaking into the Microphone" candle holders by Luigi Vaghi


Comments by Curator Murray Moss:
"The artist here creates a 'continuous profile' - this time, that of the infamous Andy Warhol. But in this case, registering the name 'Andy Warhol' with a microphone in a computer, a curve was created which was isolated and then used to generate the 3D printed model. Different people speaking the same two words, 'Andy Warhol', would create different curves, and therefore unique, one-of-a-kind 'profiles'." 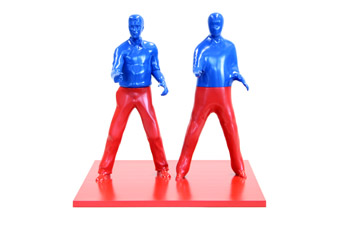 Comments by Curator Murray Moss:
"Playing with Warhol's obsession with fame, this work imposes a modern sensibility to this classic Pop Art icon, applying today's fashionable 'reductive' approach to art and design and thereby stripping the figure of Elvis of his more recognizable and distinguishing features. This famous 'Elvis', rendered today, could represent anybody brandishing a gun (or in this case, a banana - a concession to today's political correctness, even still in art)." 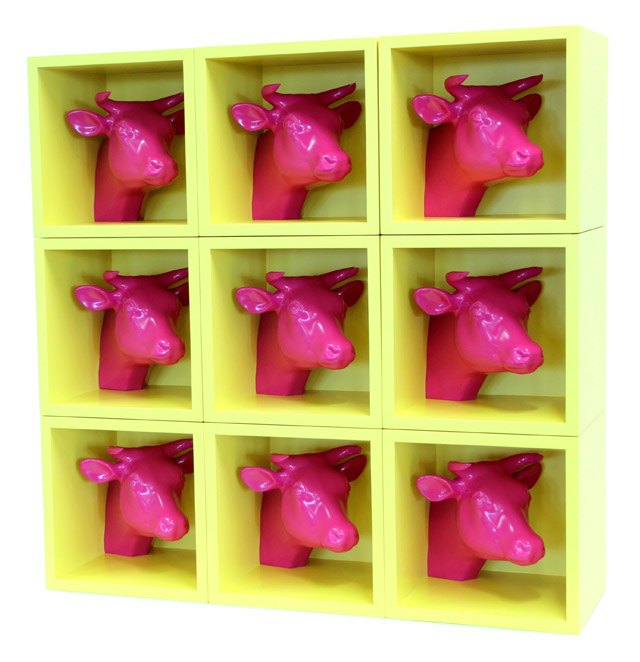 
Comments by Curator Murray Moss:
"In the words of the artist: '3D printing is something that Andy would have loved. In his factory years he mass produced artworks using his famous silkscreen technique. He tried to eliminate the artist's 'craftsmanship' and 'personality' during the process. I can imagine Warhol's Factory, today, packed with 3-D printers, printing his objects." 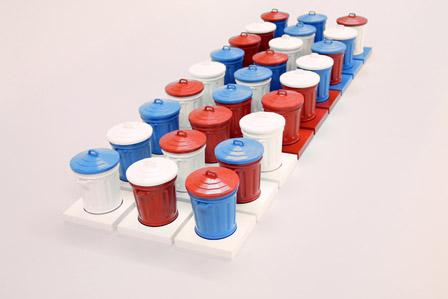 "Trash Can" by Cathrien Orie


Comments by Curator Murray Moss:
"This artist proposes that, like the Campbell soup can of 1962 or the Brillo Box of 1963, today's most celebrated, ubiquitous, mass-produced consumer object might very well be the trash can, born of our waste and overproduction. Composed of 3 elemental shapes: the base, the can, and the lid. If one introduces the possibility of 3 colors in 3D printing this object, it becomes possible to make 27 'different' yet 'mass' items."

About Murray Moss:
In the April 2012 issue of Metropolis magazine, Jennifer Kabat writes in her feature story, 'Murray's Next Act', "... Moss is no ordinary mortal, but one who has defined the design decade, who helps to see how we see objects".

Murray Moss is the founder and creative mind behind the internationally renowned Moss design gallery, established in 1994 and in its 18 year history mounting over 100 highly influential exhibitions, not only at Moss, New York, but also at Design Fairs and Museums around the world. Moss, a former fashion entrepreneur, set out to correct the public's here-to-fore 'blanket' criteria for evaluating industrial product design, over time expanding the definition of 'good design' to more accurately accommodate a nuanced multiplicity of briefs which designers often bring to a project. His agenda was not only to discover those 'bonus' narrative elements, or 'art content', often embedded in functional works, giving them a duality and fluidity which blurs the customarily rigid distinctions made between Art and Design, but also to invent more effective ways of exposing them to the general public, so that they become not only evident, but valued in their own right.

In February of 2012, partners Murray Moss and Franklin Getchell closed their Greene Street gallery and inaugurated Moss Bureau, a highly experienced and informed design consultancy providing a multiplicity of services to manufacturers, design studios, and architectural firms, as well as offering curatorial and interior design services, and brokering speaking engagements and writing assignments.

Mr. Moss has served on the Boards of the Smithsonian Cooper-Hewitt National Design Museum and the Design Industries Foundation Fighting AIDS (DIFFA), and has been acknowledged through numerous awards in his field, including the 2002 Chrysler Design Award and Russel Wright Award, House Beautiful's 2000 Giants of Design Award, and Metropolitan Home's 2004 Modernism Award. In 2007 he was inducted into Interior Design Magazine's Hall of Fame.

Materialise works with a growing list of celebrated designers and artists from around the globe, including Iris van Herpen, Frank Stella, Patrick Jouin, Stephen Jones, and many more. During the 2011 London Design Festival, Murray Moss curated a special exhibition for the Victoria & Albert Museum entitled Industrial Revolution 2.0: How the Material World will Newly Materialise. The exhibition involved a range of 3D printed objects produced at Materialise's Belgian headquarters and created by both established and up-and-coming artists, architects, and designers. It is also worthy to note that Materialise has pioneered the use of 3D printing for consumer goods through their .MGX by Materialise brand and its celebrated line of high-end design products. Created in collaboration with some of the greatest names in design today, .MGX creations have made their way into the permanent collections of world-class museums, and have an ever expanding collection of prestigious awards to their credit (including 3 Red Dot Design Awards and 4 Good Design Awards).