Belgian 3D Printing Pioneers, Materialise, Honored with a Visionary! Award by the Museum of Art and Design in New York.

New York City, USA – November 21, 2013. Materialise is proud to announce that on the evening of November 20, Materialise and its Founder and CEO Wilfried Vancraen were among those honored with a MAD Visionaries! Award in New York City in recognition of Materialise's commitment to technological innovation in 3D printing. Every year, the Gala honors leaders and innovators in the fields of art, design, philanthropy, and business, who through their work demonstrate foresight, imagination, and a commitment to supporting creativity in all its forms. 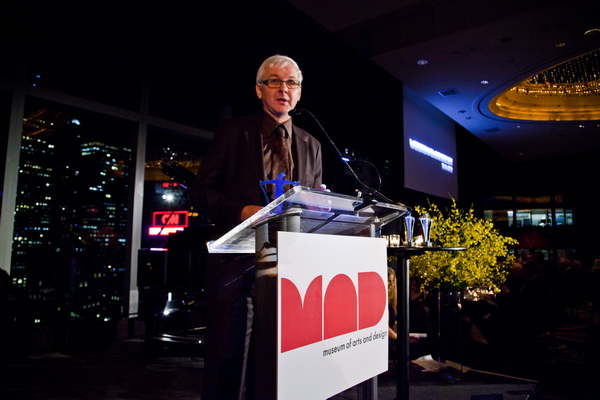 The Museum of Art and Design chose Wilfried Vancraen as one of this year's honorees due to the more than twenty years that Materialise has been working with designers and scientists to help expand design, manufacturing, and biomedical research into new frontiers, while remaining committed to artistic creativity, sustainability and the improvement of people's lives. The award was also granted on the occasion of Materialise's inclusion in MAD's newest exhibition, Out of Hand: Materializing the Postdigital (16/10/2013 – 6/7/2014). Included in the exhibition are some of the most compelling creations from the past decade ranging from sculpture and furniture to fashion and transport - many of which were produced through 3D Printing at Materialise.

Also receiving a Visionaries! Award this year were internationally-renowned artist Frank Stella, Rick Kinsel, Executive Director of the Vilcek Foundation, and jewelry designer and business leaders David and Sybil Yurman. As leaders in their fields, these individuals exemplify the Museum's mission to explore contemporary creativity across all media.

About Out of Hand: Materializing the Postdigital

Through Out of Hand, MAD aims to explore a monumental transition in the way human beings understand creation, from the earliest objects conceived and produced by individual makers through the tools of technological innovation. Today's digital fabrication methods, such as 3D printing, give individual artists, architects, and designers the ability to go beyond the traditional boundaries of production, often resulting in objects that may otherwise be impossible to realize. Artists, architects and designers who have collaborated with Materialise for pieces in the exhibition include Bathsheba Grossman, Naim Josefi, Dror Benshetrit, Wertel Oberfel, Aranda\Lasch, Softkill Design, Stephen Jones, Jan Habraken and last, but certainly not least, fellow Visionaries! Award honoree, Frank Stella.

With its headquarters in Leuven, Belgium, and branches worldwide, Materialise has been playing an active role in the field of Additive Manufacturing (AM) since 1990. In addition to having the largest capacity of AM equipment in Europe, Materialise also enjoys a stellar reputation as a provider of innovative software solutions. They have used their experience and expertise to create a better and healthier world through their involvement in AM for industrial and medical applications, and by providing bio-medical and clinical solutions such as medical image processing and surgical simulations. Materialise has developed unique solutions that make a world of difference for its many customers with their prototyping, production, and medical needs. These customers range from large companies in the automotive, consumer electronics, and consumables sectors; to famous hospitals, research institutes, and clinicians; to individual consumers interested in bringing their own unique creations to life through i.materialise or who want to purchase a celebrated .MGX design