"Quite a few doctors said he had a good chance of not leaving the hospital alive," says April Gionfriddo, about her now 20-month-old son, Kaiba. "At that point, we were desperate. Anything that would work, we would take it and run with it."

On February 9, 2012, the specially-designed splint was placed in Kaiba at C.S. Mott Children's Hospital. The splint was sewn around Kaiba's airway to expand the bronchus and give it a skeleton to aid proper growth. Over about three years, the splint will be reabsorbed by the body. The case is featured today in the New England Journal of Medicine.

"It was amazing. As soon as the splint was put in, the lungs started going up and down for the first time and we knew he was going to be OK," says Green.

Green and Hollister were able to make the custom-designed, custom-fabricated device using high-resolution imaging and computer-aided design. The device was created directly from a CT scan of Kaiba's trachea/bronchus, integrating an image-based computer model with laser-based 3D printing to produce the splint. Materialise's Mimics Innovation Suite software played a role in the design and sizing of the device.

"Our vision at the University of Michigan Health System is to create the future of health care through discovery. This collaboration between faculty in our Medical School and College of Engineering is an incredible demonstration of how we achieve that vision, translating research into treatments for our patients," says Ora Hirsch Pescovitz, M.D., U-M executive vice president for medical affairs and CEO of the U-M Health System.

"Groundbreaking discoveries that save lives of individuals across the nation and world are happening right here in Ann Arbor. I continue to be inspired and proud of the extraordinary people and the amazing work happening across the Health System."

Kaiba was off ventilator support 21 days after the procedure, and has not had breathing trouble since then.

"The material we used is a nice choice for this. It takes about two to three years for the trachea to remodel and grow into a healthy state, and that's about how long this material will take to dissolve into the body," says Hollister.

"Kaiba's case is definitely the highlight of my career so far. To actually build something that a surgeon can use to save a person's life? It's a tremendous feeling."

The image-based design and 3D biomaterial printing process can be adapted to build and reconstruct a number of tissue structures. Green and Hollister have already utilized the process to build and test patient specific ear and nose structures in pre-clinical models. In addition, the method has been used by Hollister with collaborators to rebuild bone structures (spine, craniofacial and long bone) in pre-clinical models. 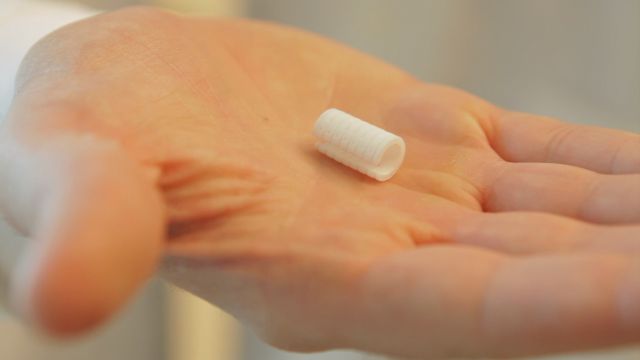 Severe tracheobronchomalacia is rare. About 1 in 2,200 babies are born with tracheomalacia and most children grow out of it by age 2 or 3, although it often is misdiagnosed as asthma that doesn't respond to treatment.

Severe cases, like Kaiba's, are about 10 percent of that number. And they are frightening, says Green. A normal cold can cause a baby to stop breathing. In Kaiba's case, the family was out at a restaurant when he was six weeks old and he turned blue.

"Severe tracheobronchomalacia has been a condition that has bothered me for years," says Green. "I've seen children die from it. To see this device work, it's a major accomplishment and offers hope for these children."

Before the device was placed, Kaiba continued to stop breathing on a regular basis and required resuscitation daily.

"Even with the best treatments available, he continued to have these episodes. He was imminently going to die. The physician treating him in Ohio knew there was no other option, other than our device in development here," Green says.

Kaiba is doing well and he and his family, including an older brother and sister, live in Ohio.

"He has not had another episode of turning blue," says April. "We are so thankful that something could be done for him. It means the world to us."

The University of Michigan is becoming a leader in pediatric device manufacturing, as is the case with the manufacturing process device used to save this baby's life. The FDA-funded University of Michigan Pediatric Device Consortium (M-PED) offers product development guidance and strategic support for advancing devices to market. In a new medical product manufacturing video released by M-PED, Green, Hollister and other U-M and industry experts share their experiences and advice.